Post call day, but still ended up oversleeping and had to ask Kels to leave my Wicked ticket by the counter...sorry dear!! Wicked's cast was as amazing, and surprising as the set. Gorgeous set it was. And it was hilarious too..blondes can be so...yes..self deprecatingly so too...

We bumped into Cheryl and Andrew, and even Jianping and his gf..how coincidental!!

We shopped abit - shops close at 1145 pm on weekends at MBS..and eventually walked downt all the waterfront bars - either too noisy or the bar food sucks so we ended up right at the other quiet end at Rio Tapas Bar .. last order at 12 and we were there at 1130 so we decided to settle down at that quiet place (the other couple moved after a while so we kinda owned the place and our little booth!!) 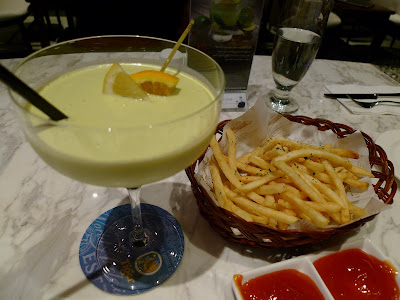 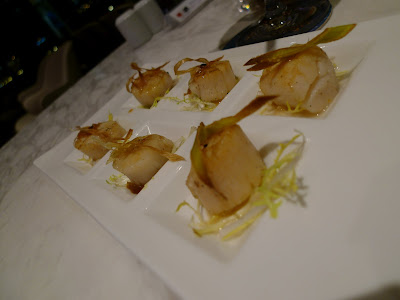 Scallops (which Kels already OD on over cny)..I kinda misst the scallops from Sabio 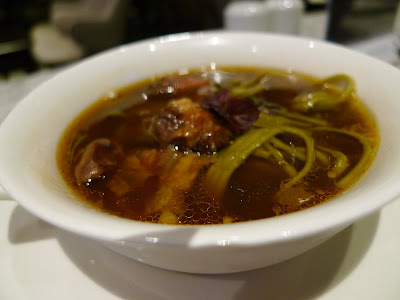 More truffle in the Oxtail Soba...this is = to my dads oxtail soup, just need to coerce him to buying that $45 bottle of truffle oil from La Forketta... 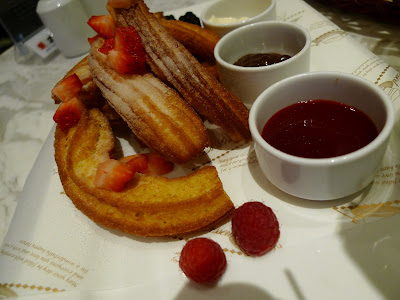 Walked one round to Fullerton before heading back to leem kopi but decided to head out to Starbucks City hall which reminded Kels of the allgreen allnighter we had at Bugis. What would I do without my best friend!! I would definitely be a hungrier person...hehe...
Posted by julie at 9:13 AM No comments: 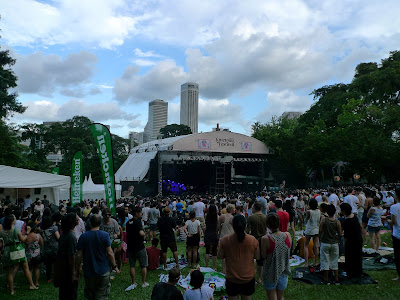 Sunday was crowds madness..the entry queue never seem to end (all the way to the ballet academy!!) so sent J to get the xkcd comic i bought heh. And once we got in (and they never checked our bag for food nor the 3litre water bag that is our survival...)..Moved thrice.. all to avoid the sun and the standing crowd (can everyone please sit down so we can sit down and actually see something!!).. central grass patch to secret corner under the trees to eventually in front of the prive booth, on the steps..

Okay enough complaints about the people. or the weather. Armoured with raybans, brollie (the impossibly big one J was holding...), and of cos the 3litre water bag (the beer queue was just insane)...we were well prepared. Plus seats in front of the food booth...and behind the (insanely crowded) drinks booth...what more can we ask for?

but great music, of cos.

Mixture of the good and the bad, with a booming surprisingly good sound system. We liked Girls (who started with an emotional rendition of And I will always love you.. and they are not girls!!) Laura Marling (folksy), Feist (++..great performer) and M 83. Too bad we missed Cults..came in just in time for Yuck. Though Chairlift was reviewed to be disappointing in Life, I liked Bruises lots...heard it from such a long time ago. Horror's Still Life had a really awesome sound on youtube, but as one of the three closing acts, was overshadowed by Feist and M83. 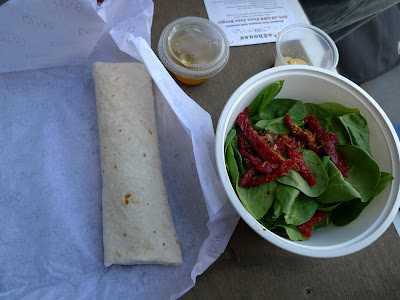 Did I say we sat right in front of Prive's booth?? the smallish unfilling Turkey/cheese wrap and Sundried tomatoes spinach salad.

Walked all the way to the exit end to check out the other food stall which turned out to be a repeat Shiraz stall that was next to Prive...

Though Shiraz's chicken kebab sandwich was quite filling...and almost had seconds cos they didnt keep the coupons...messy messy (even the sandwich itself was messy...) 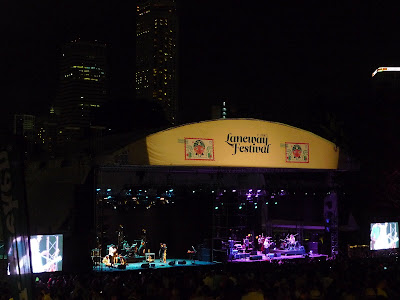 Nightfall came, and the laser show from MBS as the back drop and the moon too..gorgeous... 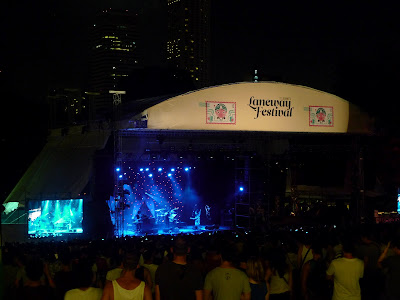 And thank goodness for single yellow lines...hehe..makes exit easy!
Posted by julie at 8:43 AM No comments: 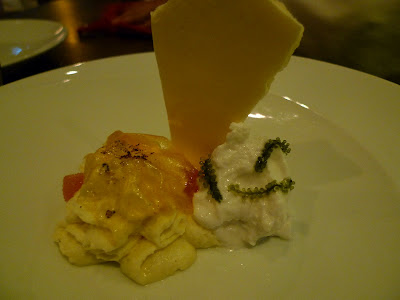 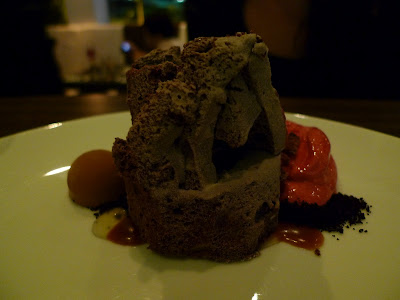 Chocolate mousse, Evian water, Raspberry sorbet. Core of caramel was quite a surprise! ;)

Man U vs Liverpool meant missing out on the massage/ramen/walas and I ended up at cel and fly's 4th stop at 2am dessert bar (Holland Village). Cel's intense tiramisu craving gave in to chocolate mousse instead, gladly so. And her new found grey c ipad cover...gorgeous indeed. Chose bar seats over sofa seats (perils of skirts), white and dark chocolate. Misst you, M. Should pass you your Coach soon!
Posted by julie at 9:06 AM No comments: 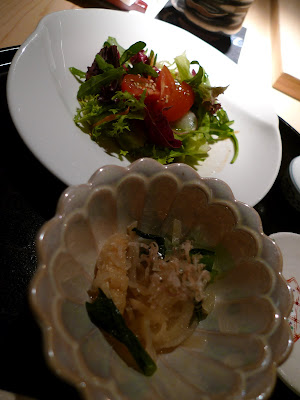 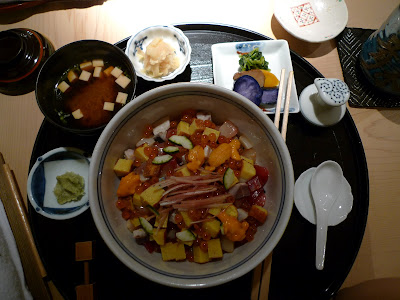 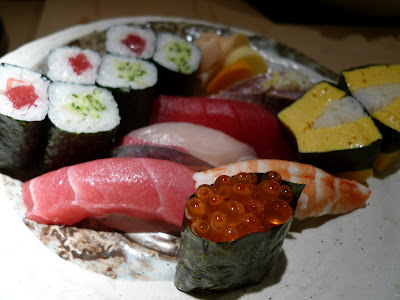 Mummy's sushi set.. which I finished the tamago for her;) 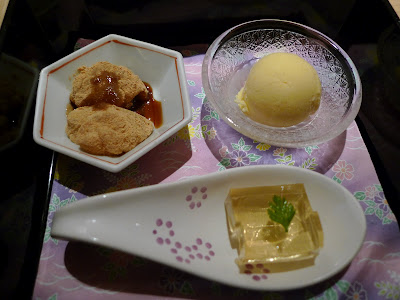 Finally! Post call with one re-adm for isch gut (thank goodness no more chop..nothing much left anyway!!) and another at 3am for post gast (needed rrt the next am and lotsa tropes...) but other than that found a new ritual of digging up old papers in the cso to read after the night rounds..which feels like a walkabout not like the paper entries in pas...and the reg cooks!! gosh...pasta/meatballs/shrooms.. its a real luxury to have a home (or pantry..) cooked meal, this warrants another entry on its own once i figure out how to connect the phone to the com..yes kels..getting more tech savvy here okay... esp since this is the 2nd home cooked pasta meal on call..amazing anaesths ;)
anyways, with post call at 1030am (super shiok) napped abit before heading out with mom with an excuse to pick up obagi stuffs from taka, we ate at Aoki (Shaw Center), a meal i've promised her since xmas (but not successful cos Aoki doesnt open on Sundays). Appetiser was a tomato salad and a wintermelon salad (which initially my untrained buds thought was radish)..prefer the dressing at Tatsuya though. Mummy had the sushi set (though she was tempted by the $100 omakase...) and was eyeing my chiraishi... in the end we shared 50/50..she really liked mine.. the tuna was so fresh! so red and translucent.. the colour of fresh fish is really gorgeous. This is probably one of the freshest chiraishi I've had..quite enjoy the dices of fresh sashimi atop the sesame rice (though the bed of rice was too little....).

Desserts were also an interesting affair with plum jelly, sweet corn ice cream, home made mochi. But of cos as the day wore on we had to stop by for ice kachang/chengtng...mum was just looking for a pair of black shoes while receeing all the stuffs i bought in new york and the singapore version prices...just to feel good...haha. Face shop stocks a eraser like eye make up pen and a cheaper version of benefit's browzings which I cant wait to try! And orchard central's black market and editor's market was a little too interesting for street/office wear..
Posted by julie at 8:15 AM No comments: