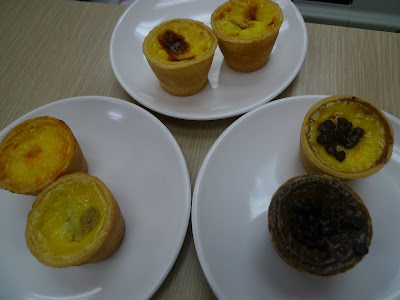 Had a round of egg tarts just before my CG adjourned to Kim's Family for dinner. Wouldnt have bothered going for CTS (doh, Principles of Chemotherapy) if not for this outing - would have dashed home after pysch stat, both Kelly and me.

Fancy Delight (Kilat Court) is just beside Kim's family and specialises in tarts - has outlets in IMM and Suntec. We had a set of 6 - cheese and durian, banana nut and curry chicken, chocolate and double chocolate. The crust was a little too thick for me, but I liked the durian one because it was so unique. Many others liked the curry chicken tart, which is more like a savoury tart. We went next door to Kim's Family (Kilat Court, Lorong Kilat) and again the wonderful array of complimentary dishes! I liked the seaweed at the top left corner - and the other new items are the potato chunks which the boys liked, and the pickle which Kelly likes (cos it reminds her of porridge days.) 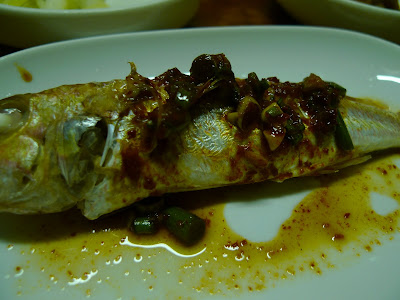 The complimentary fish came separately - and my CG thinks its a ploy to make you think its a special gesture for that dramatic effect. Whatever it is, all the dishes here are so well done, and ernestly prepared I don't really care what's the motive of presentation... 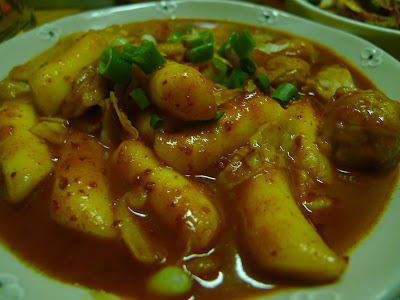 Spicy rice cakes for which the sauce was most delicious, but for wonderful chewy awesome ones I think HanSang at Square 2 does a better job.. 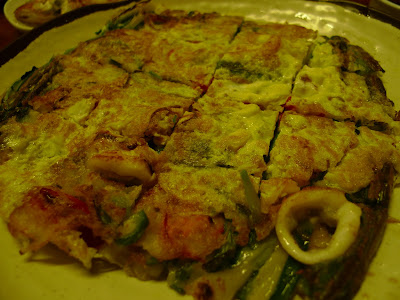 Seafood pancake...must spread the joy of this pancake! 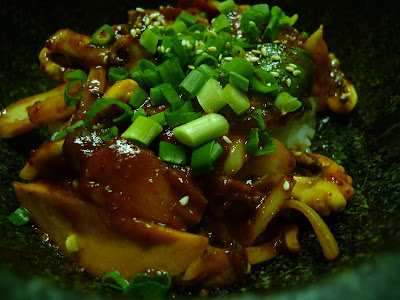 Kumaran's octopus fried rice which I cant get enough of...I realise this octopus comes in a fried rice version - served with plain rice in a claypot and meant for you to mix it all around and let it heat up within the claypot - $10 and another version which I wrote about earlier is just the fried octopus on its own at $17. I think the Fried Octopus Rice is more value for money, and nicer since the sauce is so good it should be eaten with rice - the $17 one does not come with rice. 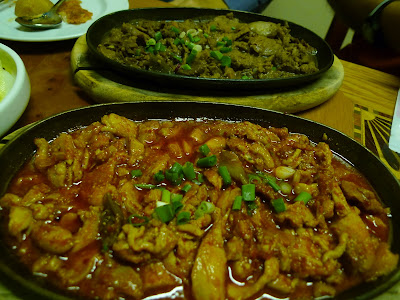 The most value for money sets are these meat sets - $7 for the chicken, beef or pork hot plate. Note that the third time I came here, they changed their policy - this $7 deal only applies for lunch. For dinner you must top up $3 for the soy bean stew which I think is quite worth it!

I think when you come here, its logical to either order a stew or a meaty dish since there's so much complimentary vegetable dishes its no point ordering a Bibimbap to OD on vegetables. (Whoops Mich, forgot to forewarn you...) 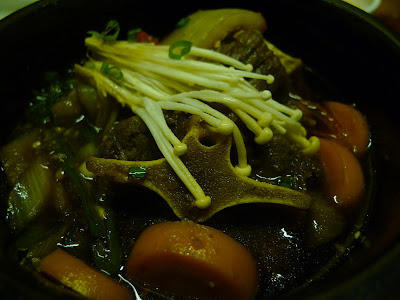 Sterling's Ox tail Stew which is so salty and did not come with rice....as recommended the way to be eaten sans rice, by the waitress. Plenty of meat though, he was struggling to finish! 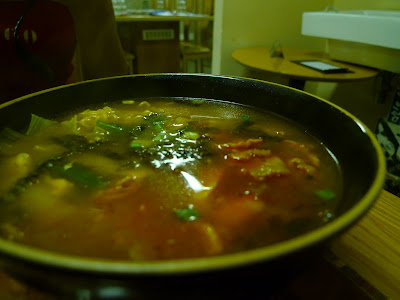 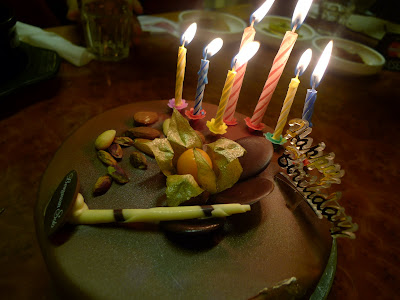 Happy Birthday Kok and me! Thanks for all that trouble and secrecy. Thing was, right after CTS I had to go Bengawan Solo at NUH to get a kueh lapis for Gran's birthday at home AND the CG was gonna get a birthday cake for us! And cos Kels pon lect there was this shroud of secrecy and suddenly she was loitering at the Deans office planting the cake bomb at a corner somewhere......till Jason and Sterling walked by. Thanks for the surprise ! Though I kinda figured out.... Sorry I had to scram early but the company was priceless! Heard about the mad squeeze in Sterling's car to PS later on and the relentless teasing poor babe...Cheers to CG18 2008... Kelly and I (Yes we're still the bottom 2 of the next CG 18) are continuing the CG 18 legacy... feasting legacy that is...
Posted by julie at 1:21 PM