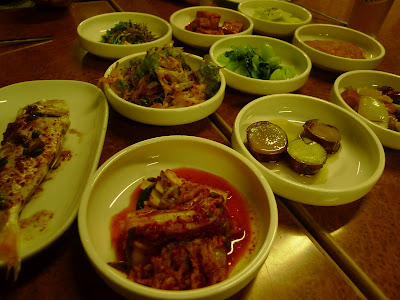 I like Kim's Family (17 Lorong Kilat #01-06 Kilat Court),so much I've been bringing all my groups of friends here for the Korean fare, and shall be blogging about it reverse chronologically - deciding against putting up everything in one entry cos there's so much along Lorong Kilat to write about - and I'm raring to try the Korean fried chicken there too...anyone up for it?
Anyway, the complimentary side dishes are amazing! So much variety (with unlimited refill too, on request). The first time I came here I was swamped - esp since James didn't eat raw vegetables 0_O. What was new today was the sweet potato (the 3 stumps there), the mixed sausage vegetable, and fried taukuar. My all time favourite is the pancake! 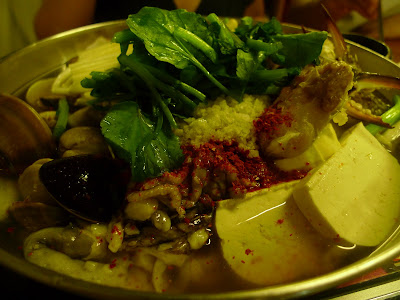 We came here for Newman's birthday with Nat, and Kheng as well. It was a case of sloppy vs. giving face so no guesses who dressed up =P hell, it was raining as well (though I was not the one in hells), better appreciate it okay birthday boy!
Anyway, I learnt to make a reservation here after the first time when James and I queued for damn long to get in. More of that story how J and I landed here in the end (since I never read about this place anywhere before)
Tried the seafood stew ($30) which was chokeful of ingredients - crab, squid, prawns, clams - all that Kheng avoided, not sure cos of the seafood or the choke-ful of chilli, but the rest of us relished everything soaked in the tasty broth including the tau kuar and noodles and giant bean sprouts. Its worth a try, but you might wanna maximise your 30 bucks spreading it over some soupy stews and meaty dishes like James and I did the first time we came here. 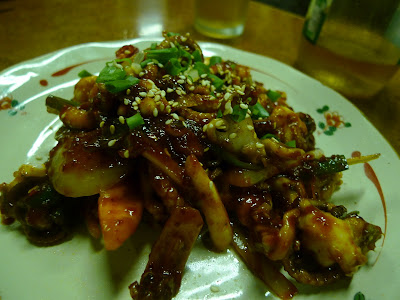 Ordered the fried octupus ($17) cos the second time I came here with my CG I didnt steal enough from Kumaran - the sauce is so flavourful, the octupus is quite secondary - the rice and octopus (or anything, even vegetables) tasted so good with that powerful sauce. It's DAMN GOOD! 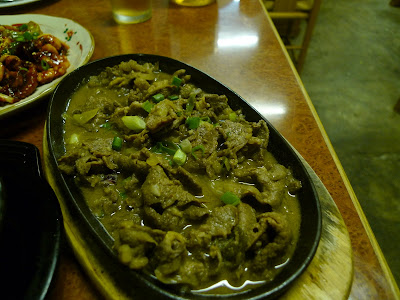 Kheng took this picture of our hot plate beef (sigh , so much FLOOR Kheng). For dinner, you must order this hot plate and top up another 3 bucks for... 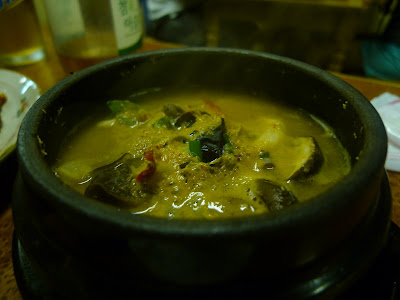 ...this soy bean stew - comes with vegetables and seafood. Not a bad deal, but for lunch you can just order the hot plate set sans the stew, so its cheaper at just $7 a set. 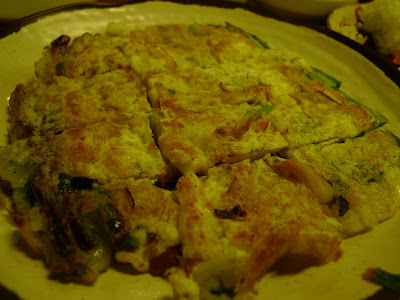 My ultimate favourite item here is the seafood pancake $10- its like a very crisp Korean nian2 gao1 - its slightly eggy, and the right amount of glutinous flour, with crisp sides and spring onions and seafood. Its one of the best I've tried - its like a healthier form of oyster omelette. 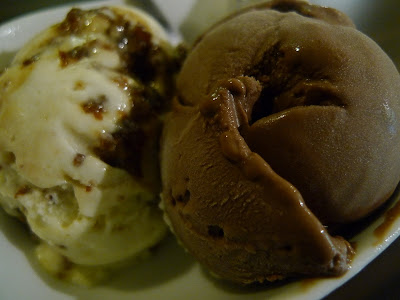 Udders (Kilat Court) opened at Lorong Kilat (much nearer home!!) and as you can see, I can never resist a trip there when I'm near (or sometimes, not near and not convenient also go, sigh), and had my dosage of rum and raisin and chocolate whiskey. CHOCOLATE WHISKEY! sorry I just had to get excited all over again over my current obsession. 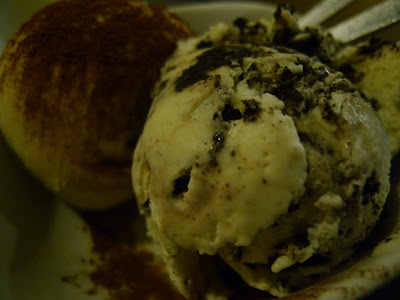 Tiramisu my another all time favourite and Newman's cookies and cream. Everything became a creamy blur after that and we were so full! Happy Birthday Newman! Good luck with finding that B&B! (and sorry for ripping your backpack in Aus.....=P)
Posted by julie at 12:39 PM