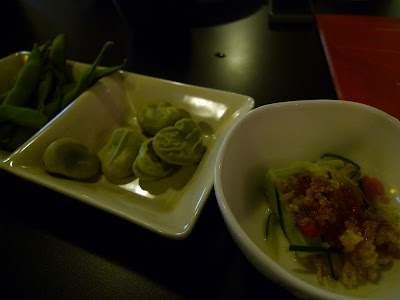 I'm a little sad when I realised the old Ginga restaurant has been replaced by Irodori Japanese Restaurant (382 Havelock Road #03-01 Riverview Hotel ). The former Ginga had really good teppanyaki (salmon and swordfish), and excellent deep fried shishamo, and its the only jap buffet place I know which serves Unagi and soft shell crab sans the sushi rice. I still remembered watching soccer in the lounge after the buffet with icecream cake served ! This was during the dinner buffet last Jan with Z.
The current Irodori restaurant looks more refurbished and doesn't have the above perks of Ginga, but nonetheless, its time to move on and I should not reminisce so much about lost places nor relationships.
I met Soumi, Ian and Carol here, and we made use of the voucher that Michelle gave us - for every 2 people 1 dines free - but since there were 4 of us we paid $30 nett each. UOB cardmembers enjoy a 25 % discount here but i think its only valid for lunch.
Everyone had the starters of edame, broad beans, and the green tea tofu - the latter was a delight with all the fried crispy batter on it. 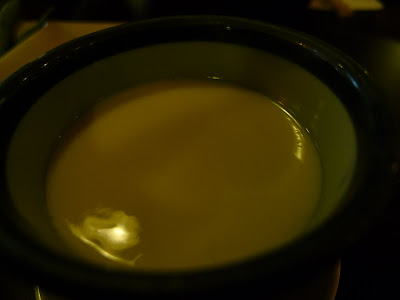 Ian and I had the Chawanmushi which was ordinary but a huge lump of chicken and crabmeat right within.. 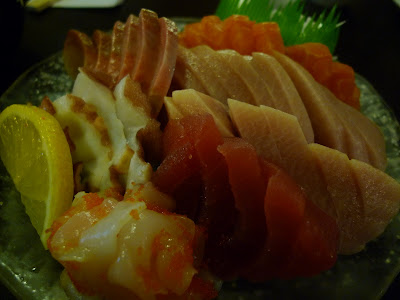 The best part was of course, the mixed sashimi platter and I must say Irodori serves the freshest and best selection of the jap buffets I've had, and in M's words, the only place which serves swordfish sashimi. Carol's favourite was the salmon, and I liked the swordfish and hamachi, as well as *surprise* the squid. All very fresh.

Oh yeah, they'll ask you if you want your sashimi in thick or thin slices and we asked for a thin cut, though it was still satisfyingly thick. 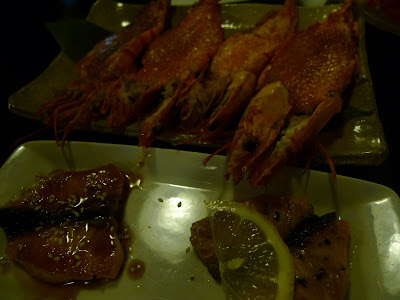 The next best part of the buffet was the complimentary jumbo prawns - it was friggin AWESOME!! It had mayonaise sauce and egg roe atop it and it was so rich it tasted like it had cheese in it too (must be my imagination). Too bad it was only one serving. We could prob eat enough to cause its extinction.

Below that is the salmon steak and salmon teppanyaki. Alright normal.. couldnt really tell the difference between both, one was supposed to have teriyaki sauce and the other one didnt.. 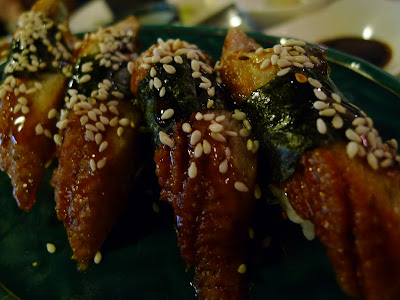 I loved the unagi sushi here, a fantastic balance between the teriyaki sauce and the fish, and again well proportioned with the rice (though I miss Ginga's unlimited untainted unagi...) 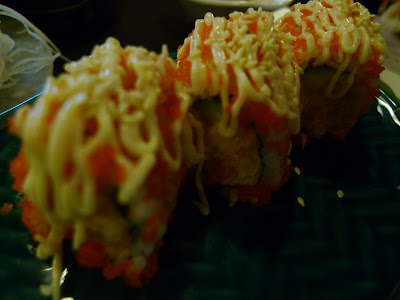 The irodori rolls were really rich, there was mayo, fish roe embedding the rice roll which contained ?baby lobster and mayonaise? 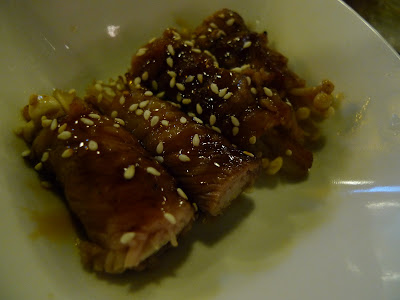 The beef roll with inoki mushrooms were a hot favourite but I somehow wasnt a fan cos I eat alot of beef cooked in a similar style at home....I prefer eating chunks of beef outside (read: STEAK) 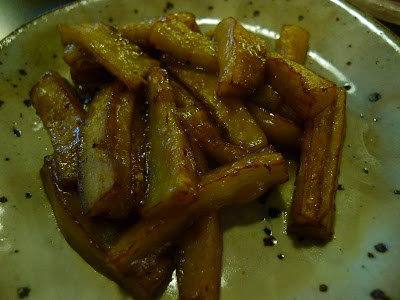 The eggplant was wonderful, I think it was Carol's favourite since she had one all to herself later on in the buffet. It has a crisp outer layer and extremely salty, its done in a style I've never tried before. 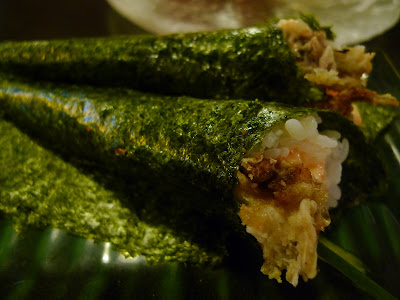 Spider handroll (Soft shell crab) tasted like the ones I used to have at Sakae Sushi.. 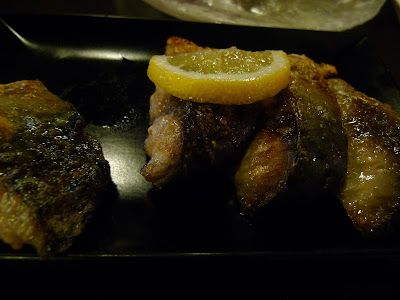 Mackeral was freshly fried and the sauce was also good.

All this teppanyaki is making me miss those crazy 1-hour-eat-all- you - can Kuishinbo express lunch buffets Carol and I use to go for everytime she's back from London. We took so much raw fish to go do teppanyaki the waiter who served it to us was also amazed (i guess, no amount of gluttony fazes people who work in such places anymore). 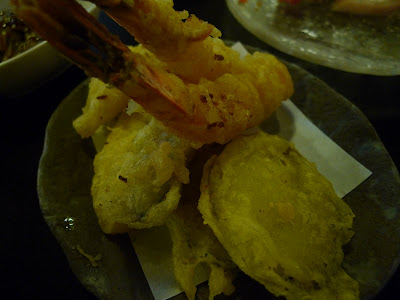 Had a selection of mixed tempura - 2 prawns (which Soumi and Ian had), eggplant (Carol) and 2 tempura fish which I had - never really ate fish in a tempura form. It was just like the fish in fish and chips, albeit in a miniature form. 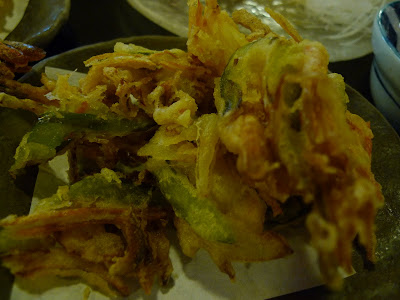 Kakiege (tempura vegetables) was also light and refreshing, a hit with the girls. Again reminds me of the Kakiege I used to like at Sakae Sushi. 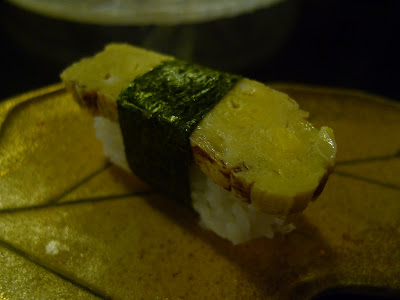 The tamago I had was a little insipid, like it was straight out of the freezer and had this strong taste of spring onions (which I dislike). Do not chose those leng3 men2 items like I did quotes Carol. 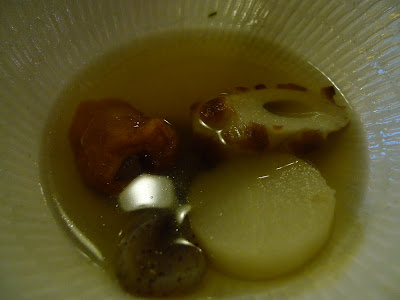 This was Japanese Onsen or Yong Tau Fu. The broth was really good, and the radish was the best part of this cos it soaked up most of the broth. The other tofu items were not so fresh ! 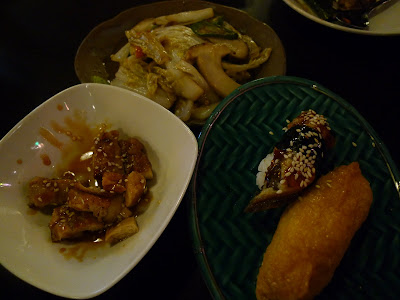 Chicken Teriyaki, Fried mixed vegetables for everyone, but my own inari sushi and unagi sushi.
Do not go near the inari sushi nor the tamago unless you like frozen items... 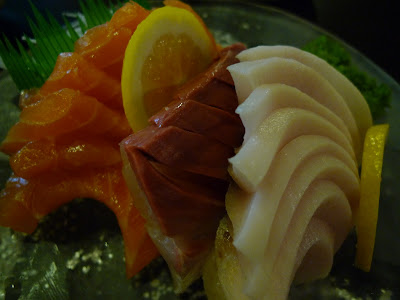 Repeat order of sashimi - salmon, yellowtail and swordfish, of which I inhaled most of - my friends were egging me on to take one last breath to finish up the rest but... 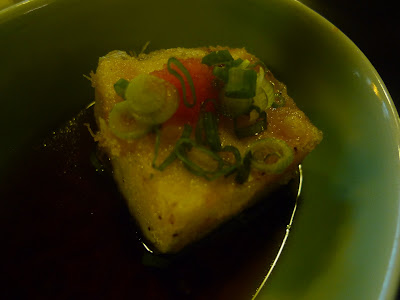 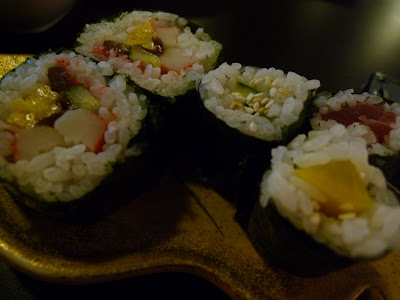 My other mistake was to order a friggin JUMBO roll at the end of the meal (that kinda ended my meal, thats why) and the chef even gave me another COMPLIMENTARY JUMBO roll....double ends my appetitie....and the triple roll is nothing special, just 3 of the most insipid ingredients you can find in sushis! AHHH! What an anticlimax. 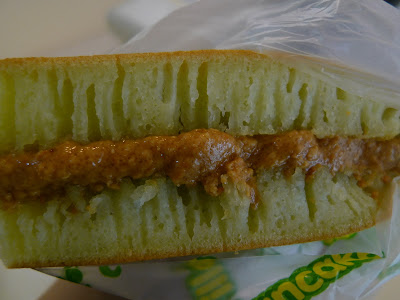 Whilst Carol went on a journey to the West, Ian Soumi and I went to Ion - think the craze has died finally, the queue for the takopachi is not insane anymore and Uniqlo is not packed. We browsed around (sigh, still a dearth of size 10 shoes boo i miss aus) and went around from Ion to Taka to Wisma, to all the Sephoras there was, and to household shop at Tangs, and browsed for cheap sample cosmetics at Lucky Plaza.
Oh and the peanut pancake at Jollibean (B1, Paragon) has a new pandan flavoured dough! Found it when browsing for Difflam lozenges at Paragon. 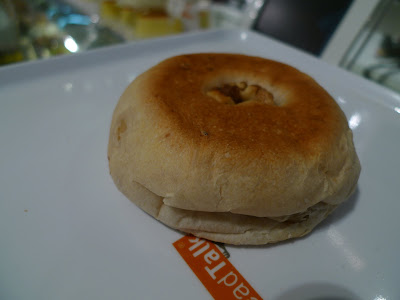 And Breadtalk (B1, Wisma) has this new pumpkin/yam walnut bread ! Chunks of pumpkin and mash yam within the core of the bread, I really like this one!
Oh man...im going for yet another Jap buffet tmr at Ikoi...gonna be rolling back to school man...
Posted by julie at 11:28 AM